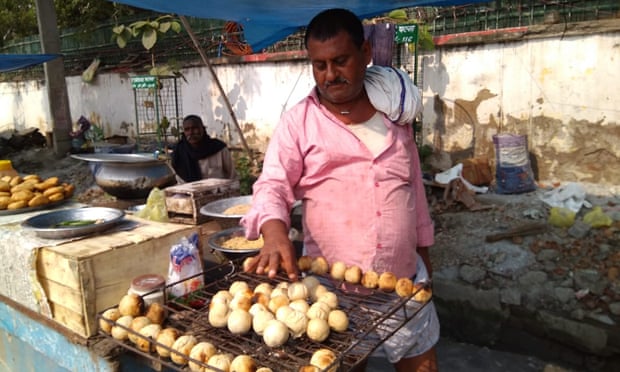 The tantalising scent of freshly cooked dough rises from Brij Bihari Rai’s food stall outside Patna zoo. Sitting on top of the grill is Rai’s specialty, litti chokha, stuffed wheat flour balls tossed in ghee and served with mashed aubergine or potato on the side. But there is another ingredient, Rai says, that is essential to the dish’s distinctive flavour.
“Cow dung flame, smoke and ashes add a special taste to this dish and that’s why food lovers rush to our stall to relish the food,” he said.
Yet Rai is one of about 5,000 street vendors in Patna, the capital of Bihar state, who say their livelihoods are under threat.
After the air quality in Patna declined to severe levels, the state government banned the domestic burning of both cow dung and coal, blaming them for the pollution.
But without the smoke from the cakes of cow dung to cook and flavour their food, vendors say their dishes will be ruined.
“People visit our stalls just because of special tastes. Who would come to us when the food is not tasty?” said Rai, who has been doing a roaring trade since the popular Bollywood actor Aamir Khan stopped by in 2012 for a taste of the typical countryside dish. A photograph of Khan tucking into his litti chokha still hangs proudly on Rai’s stall.
The government has promised to supply the vendors with gas canister stoves to replace the traditional fuels, but Rai said gas is no substitute. “The ban on coal and cow dung simply means we will have to shut down our business.”
Other street food vendors in Patna said they too could not make their food without the traditional fuels. Fritters, another favourite often referenced in the speeches of India’s prime minister, Narendra Modi, are made with batter which is deep fried in oil over cow dung or coal flames to make them crunchy, before being served with chutney.
Baban Sao, who runs a stall outside a government hospital, said: “I came to Patna to earn a livelihood and opened the fritter shop finding good potential in it, but now it looks like we have to shut down our shop after ban order.”
Sao, 52, earns about 1,000 rupees (£11) a day and a good amount of that income is spent on buying coal. “It’s the coal which adds taste to the food and foodies love to eat them with fried green chilli,” he said.
Vishal Anand, programme coordinator of the National Association of Street Vendors of India, said the ban would affect more than 5,000 street vendors because the majority of them were largely dependent on cow dung cakes or coal.
Patna is not the first place in India to ban the burning of cow dung. In 2015, the fuel was banned in the areas around the Taj Mahal, in neighbouring Uttar Pradesh state, out of concerns that the smoke was staining the mausoleum, turning the white marble yellow.
Last year Patna became the seventh most polluted city in the world, according to Greenpeace. Sanjay Kumar Agarwal, a Bihar official, said the ban was essential for the environment. “We have banned burning of cow dung and coal keeping in view the rising air pollution and environmental concerns,” he said.